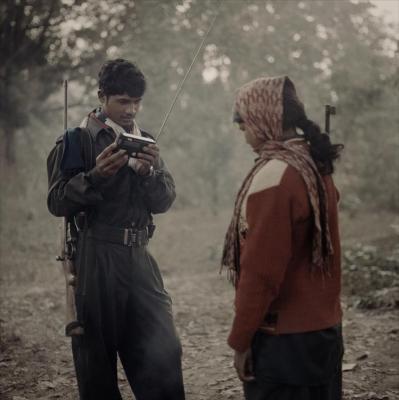 For a more recent CV or bio please visit the artist's website, http://www.poulomibasu.com


Poulomi Basu is an Indian transmedia artist, photographer and activist.

We have run out of new places to conquer, new places to mine, new places to dam. The remaining oil resources are there in places where it is untenable or difficult to get. They are now coming to those most remote places―the Ramu Nickel Mine, the Tar Sands of Alberta. ―Winona LaDuke

Photography is a form of lighting in motion. Poulomi Basu’s book Centralia (2020) offers a succession of giddy, insomniac, fugitive images, mostly shot at night and on the move. Fields smolder, forests blaze, the moon shimmers. Through a clearing a teenager walks with her rifle. A spray-painted man poses as a metallic Gandhi at a village party. The neon perimeter of a house is a fluorescent hallucination.

Photographers, writes Georges Didi-Huberman, are travelers who move like large-winged insects. With light-sensitive eyes, they act as fireflies on the alert, “flying at low altitude over the troubled hearts and spirits of our times.” Their cameras turn the photographer’s gaze into a “psalmody of light, click clack, light, click, clack.” A good storyteller blurs fact and fiction and Basu’s Centralia is a work of both documentary reportage and fiction, one that brings home the challenges that come with telling a story that is not her own. The book takes its name from a near-ghost town in the state of Pennsylvania, notorious for its decades-long underground coal seam fires and toxic fumes. Settlers acquired the land surrounding what is now Centralia in 1749 from local Native American tribes and it became a prosperous coal mining hub, rocked by bloody, anti-union clashes in the late nineteenth century. With World War I and global depression, Centralia lost its fortunes and its future, eventually becoming uninhabitable. In naming her project about an unfolding far-away conflict over lands and their use after this American relic, Basu says, “Centralia is the future.”

Basu produces a deranging account of an ongoing war elsewhere: the mineral-rich lands in the states of Chhattisgarh, Odisha, West Bengal, and Jharkhand. Journeying deep into the forests of Eastern India, she tells the story of a protracted, little-known, and under-reported war between the Indigenous inhabitants and the Indian state-corporate apparatus. Since the collapse of the major European empires, economic conditions linked to structural adjustment programs have enabled corporations to seize vast lands from Indigenous communities. This is not unique to India: in seeking to extract mineral ores, crude oil, timber, and natural deposits, multinationals have encroached upon tribal communities worldwide.

I have written elsewhere about how the portrayal of the People’s Liberation Guerrilla Army (PLGA) divides critics, academic, and artistic communities in India. Outdated authoritarian ideologies and rigid hierarchies certainly structure this Maoist insurgent group, whose commitment to a “protracted people’s war” against the state and the enforced enclosure of the commons has escalated violence against civilians. In following the Maoist dictum that the guerrilla must move amongst the people as fish swim in the sea, PLGA’s warfare strategies pit innocent civilians against the paramilitary. Retaliating, the latter destroys villages, performs extra-juridical killings, torture, rapes, and arrests. Dressing up bodies in military fatigues blurs identities on both sides.

“Even if you cover this honestly, there are so many things you don’t know,” writes a local journalist interviewed by Basu. “The Maoists won’t tell you about them, the police always lie. The villagers don’t tell you anything. So how well can you really cover this?”

Obfuscation becomes an aesthetic strategy for Basu, an approach that sets up a deliberate breakdown of ordinary vision and of knowledge bound to documentary storytelling. She repeatedly questions possibilities for visibility and transparency. Basu performs the theatrics of forensic documentation on crime scenes and inserts clues that may be unreliable. Here the bloody, severed head of a baby goat, there the haunting remains of a camp.
Centralia withholds lyricism when portraying the PLGA’s guerrillas. Basu scrutinises PLGA’s political intentions and the horrific consequences of their revolutionary politics for civilians caught in the crossfire. Moving through the thicket of gorgeous and lush forests, she resists the lure of romantic framings. The guerrillas have weaponized nature itself: trees become shelters and habitats, and Kalashnikovs rest against the barks of ancient trees before pujas (acts of worship). Basu dislikes the term “embedded” to describe her personal engagement with the groups over the years. She prefers the term “immersed.” Although she enjoyed the protection of Maoist units to gain privileged access to remote conflict zones, Basu remains a stranger amongst these camouflaged comrades.

Fiction allows for forms of latitude and freedom that can offer “a universe of infinite complexity,” writes Arundhati Roy. There is a responsibility that comes with the freedom to imagine and Basu makes good use of both to create Centralia. There is no release from this nightmare. Flames all around, she opens her lenses to the night sky.

Emilia Terracciano is a writer and lecturer at the University of Manchester in the UK.

Poulomi Basu lives in London, UK, and completed her residency at Light Work in February 2020. Autograph has collaborated with Light Work since 1996 and co-sponsored this residency. www.poulomibasu.com