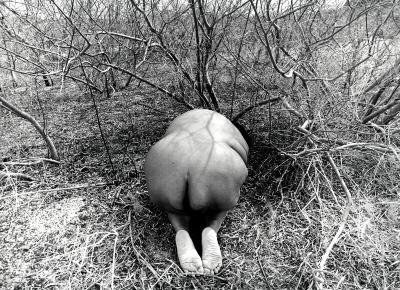 Laura Aguilar (born 1959) spent most of her prolific career examining her identity as a Chicana lesbian artist. Aguilar was born in San Gabriel, California in 1959 and grew up in the San Gabriel valley. Aguilar’s family is native Californio, Mexican and Irish. Her father Paul Aguilar was second generation Mexican American while Aguilar’s mother, Juanita was half Irish and at least fifth generation documented Mexican Californio native.

After studying photography at East Los Angeles College, her photographic production was characterized by portraits of diverse communities in the Los Angeles area and self-portraits, which are a representations of herself as a complex individual, Chicana, lesbian and struggling with poverty, learning disabilities and depression. Later in her career Aguilar would incorporate nude self-portraits and nude portraits of other women into her work, challenging contemporary depictions of beauty and highlighting the intimacy between the female form and nature. Ahead of her time, Aguilar’s photographs first expose the visibility of these underrepresented and marginalized women, then celebrate them. Among her most recognized series involving nude self-portraits in nature are Nature Self-Portrait (1996) Stillness (1999) Motion (1999) Center (2000-2001) and Grounded (2006-2007).

Aguilar died in 2018 at age fifty-eight, when recognition of her work was gaining momentum. Her retrospective, Laura Aguilar: Show and Tell at the Vincent Price Art Museum in Monterey Park, CA was the breakout exhibition of Pacific Standard Time: LA/LA: Latin American and Latino Art in LA 2017-2018 and was Aguilar’s last exhibition during her lifetime. Since her passing, she has joined the ranks of other iconic female photographers.

In 1990, Laura Aguilar began work on her largest series, Clothed/Unclothed. In this series, thirty-five portraits of individuals, couples and/or threesomes, all close friends of the artist, were portrayed side-by-side, clothed and nude. Unlike Helmut Newton’s Sie Kommon (Naked and Dressed) Paris, 1981, Laura captured subjects who were diverse in their body types, sexual orientation, and relationship to one another. The series begins with the artist herself in Clothed/Unclothed #1. As the series progressed, Aguilar created a study of nude self-portraits and began to gain confidence in being nude in front of the camera. Twelve of these self-portraits were then complied into the large wall mural, 12 Lauras (1993), a collection of these self-portrait studies used for the evolving the series. The diptych and triptych portraits in Clothed/Unclothed are significant works as they pave the way for Aguilar’s celebrated self-portrait in nature series and her international renown.

The artist’s goals in producing this series were to create visual images that compassionately reflect the diversity of the human experience by focusing on individuals in the lesbian and gay communities and people of color. According to Aguilar, Clothed/Unclothed “represents a collaborated effort between the subjects and myself. I intended to uncover the society assumptions that mask our identities. These images invite the viewer to experience racial, ethnic and sexual identity in the most vulnerable form. The subjects’ express through the camera lens a personal view of reality; that is, a positive sense of physical and cultural being. Challenging societal stereotypes of physical beauty, these images convey deep self-acceptance in spite of how others may view us.”

*from the estate of Laura Aguilar circa 2021