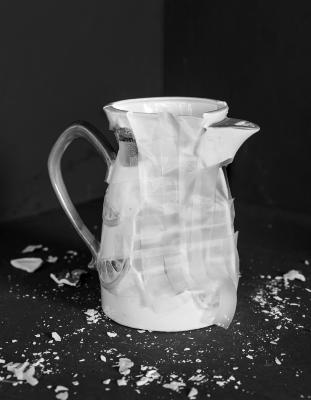 James Henkel is an American artist who uses photography to explore his interests in the functional beauty of the “vessel.” He explores ideas of the container and the contained. Recent exhibitions include Stacks + Spills at Artspace, Raleigh, NC; Here and Now: Photographs from Gettysburg at Katherine Nash Gallery, Minneapolis, MN; and Through the Lens: Twenty Visions at Cavallo Point Gallery, San Francisco, CA. Henkel’s artwork is part of numerous collections including the San Francisco Museum of Modern Art, San Francisco, CA; Whitney Museum of American Art, New York, NY; and Museum of Fine Arts, Houston, TX. He is recipient of the McKnight Foundation Artist Fellowship. He currently teaches in the Art Department of the University of Minnesota, Minneapolis, MN.

James Henkel’s fascination with books began in the 1970s while he was conveniently living above a used bookstore in Minneapolis, Minnesota. Henkel would frequent this shop, sifting through the dusty shelves in search of titles rich with visual possibility. He began to use what he discovered there as part of his photographic studio work. He eventually began placing and stacking objects on the spreads from books he stumbled across, and photographing the results with his large format camera—this small, subtle intervention had the power to transform the meaning and significance of the book itself. Soon he pushed this practice further, and began “drawing” on the books with the golden beams of light that came in through his window as well as various natural materials, like mud and sand. The book serves as a personal vehicle, or symbol of meaning to him.

“Working with the books has seemed to be a way to personalize the book and make it a more visual experience,” Henkel told Lia Newman of Raleigh’s Artspace on the occasion of his 2010 exhibition there, Stacks + Spills. His way of talking about his work is almost too simple for the cumulative complexity of his images. The still lifes he makes live on in photographs that illuminate photography’s own relationship to subjects of history, science, painting, literature, and language.

Henkel has always been a naturally prolific artist. He has approached picture-making in a similar way for over thirty years now, yet each of his projects is uniquely intelligent and delightful to spend time with. When he arrived for his residency at Light Work, he brought along with him a farmer’s market-sized tote bag filled with publications he has produced in recent years. To view Henkel’s life work through this bag of books (appropriately, mostly including sequences of pictures of books) was a wonderful way to get to know him and his pictures better. Each book helps to illustrate the overall arc of his artistic career. During his residency month, Henkel continued several ongoing studies, and also produced new work based on the unpredictable things he came across during his time in Syracuse.

One of his discoveries was a nearby lot, primarily used as a hangout by young skateboarders. Henkel was drawn to the detritus of the lot—broken bits of concrete and bricks that he would photograph as “found” sculptures in the midday sunshine. As he has worked with books in the past, he stacked these pieces of construction to create towers with new significance. He photographed in black and white, reducing the subjects in the center of the frame to their pure form. The rich shadows cast by the harsh sun mirrors the architectural structures. A few of the images in particular seem to trick the eye into perceiving the dimensionality of space in an altered way, and the shadows themselves as physical objects. And in one photograph, there is a brick that one could swear is floating—or that an act of Photoshop is at play. That’s just the way Henkel saw it. It’s not the form he is ultimately after, or the oscillation between two and three-dimensional space in a flat image, but the elusive beauty of what’s fleeting. “When I work in the studio by building and arranging things I am not concerned with creating interesting formal compositions,” explains Henkel. “I want the work to seem more like a document of a ‘possible’ structure or arrangement, one that may be temporary.”

When he wasn’t taking walks to the lot to experiment with these new pictures, Henkel spent hours at Light Work’s artist apartment photographing books, his usual routine. But one of the books he brought with him was particularly special, a well-used copy of The Last Flowers of Manet, a catalog of sixteen small floral paintings that Edouard Manet made during the last months of his life. When Henkel first acquired it, it was the smattering of paint on the book that immediately struck him. Another painter had almost certainly used it as a reference. He loved the idea that a previous artist had already altered this book, and saw beauty in the opportunity for a three-way collaboration between Manet, this anonymous painter, and himself. On top of the colorful floral arrangements, amongst fingerprints and paint splatter, Henkel added new brushed gestures in white and then black paint. He gently traced the form of the original arrangements, and with these simple sweeping marks added new flowers. Photographed on a velvety green backdrop that references the cover of the book, the final images deconstruct and flatten the multiple planes of the object itself. As with much of his work, through photographs he manages to expand our vantage point on time, space, and meaning.

Henkel’s deep curiosity drives his constant image-play. Whether by cutting, folding, stacking, or prompting illusion with light, he always searches for the intricacies within a simple idea. His photographs sharpen our own curiosity, and as with digging through his bag of books, one can’t help but wonder what comes next.

Shane Lavalette is a photographer, the publisher/editor of Lavalette, and the director of Light Work. He completed a residency at Light Work in August 2011. www.shanelavalette.com

James Henkel is an artist and former Professor in the Art Department at University of Minnesota. He recently relocated from Minneapolis, MN, to Asheville, NC. He completed a residency at Light Work in April 2015. www.jameshenkel.com